and all other areas of finance.

Having assisted in organizing the funds for a $58 billion project within weeks has placed him within the very top of the private equity sector in business. His close ties to the Hollywood elite has enabled him to create new and innovative ways to finance films.

Residing in Los Angeles and New York City for the past 23 years he has forged relationships with the top decision makers from around the world. His ability to negotiate and structure projects for funding has made him one of the top deal makers in business today.

Since 2019 Dr. Daniel L. Garcia has been bringing and securing many US based companies to be presented and exported to Dubai and the Middle East.

“What is clear is that there is a vast amount of wealth in the region – recent estimates suggest that the Middle East has around $3.1trn of investable assets – and that a significant and increasing proportion, estimated variously between 20% and 40%, of it is held by, or for women.

There has been a growth in bank and boutique advisory services concentrating on female investors.

Historically, private wealth in the Middle East has often been viewed as family, as opposed to individual, wealth and run centrally, with strategic management led by male family members. Whilst decisions and actions are often highly influenced by female family members, such influence is informal and usually not visible.

We are now seeing increasing participation and visibility of women in entrepreneurship, in the strategic management of family wealth and in growth of their own independent investment portfolios parallel to but separate from family wealth. 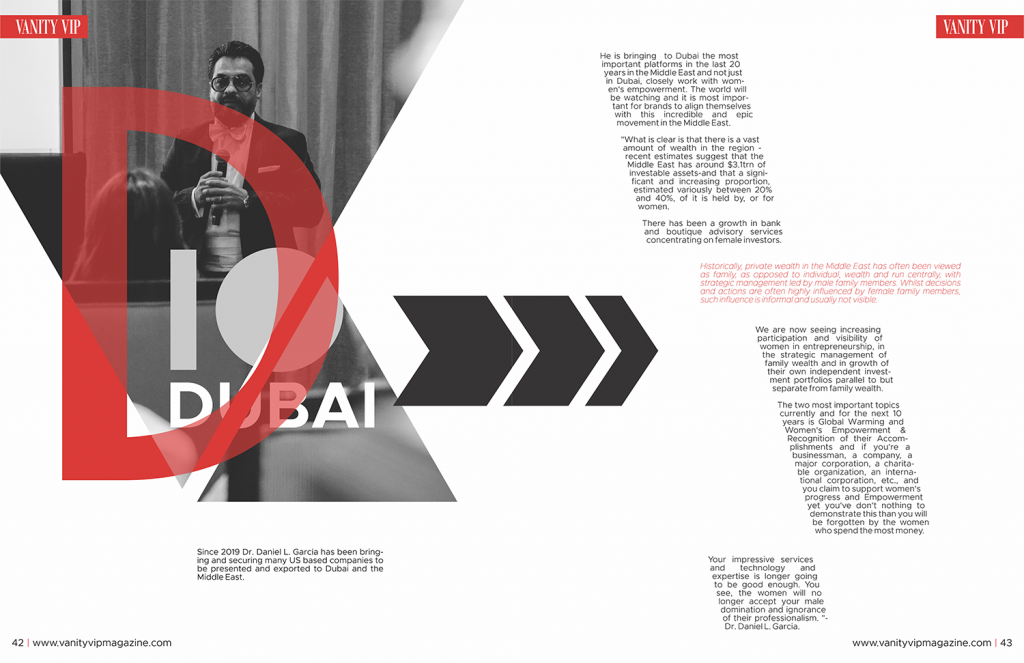 The two most important topics currently and for the next 10 years is Global Warming and Women’s Empowerment & Recognition of their Accomplishments and if you’re a businessman, a company, a major corporation, a charitable organization, an international corporation, etc., and you claim to support women’s progress and Empowerment yet you’ve don’t nothing to demonstrate this than you will be forgotten by the women who spend the most money. Your impressive services and technology and expertise is longer going to be good enough. You see, the women will no longer accept your male domination and ignorance of their professionalism. “- Dr. Daniel L. Garcia.

Tell us little about yourself

My name is Meriem GHARNITI, I am an actress, poetess, journalist, fashion and beauty blogger. I moved to live to Dubai as it is the fastest growing city in the world, and from this fabulous city I had started my job as an actress, correspondent and fashion blogger. My hobby is poetry.

What is your biggest dream?

My dream is to be world known as a fashion and beauty blogger and travel YouTuber and to have my commercial line soon.

Who has been your inspirational person?

Huda Beauty does influence me a lot and I get my inspiration from her. She is beautiful, strong,  determined woman and at the same time down to earth person.  I like her as a beauty blogger and entrepreneur.

If you could change anything in the world what it would be?

I would stop pollution. We are damaging our planet, we will leave nothing to next generations and this should stop. And we need to act as soon as possible. First step is to understand the danger from our behavior and second is to take the necessary procedures to get back the balance to our planet.

What is the perfect idea of romance for you?

Romance is a status that take you away from reality, it is a happy dreamy world no matter the hard life you had.  Romance it is waiting by the door with big smile, while your love is coming in, it is bouquet of flowers, kisses during moonlight night, it is hugs in island where the sky embraces the sea forever. Romance for me it is a crazy moment when people are invisible for lovers, you can say it’s a real freedom.

I always say let your sense guide you. It is seems a crazy idea because in relationship love is not the only factor to make your relationship successful: the personality, morals and ethics are the keys of the relationship to be successful. No women would accept to be disrespected by a man or to be with unfaithful or immature man and that’s what I mean by saying follow your sense. As a strong woman will never accept any relationship that doesn’t meet her desire, and she will find the power to stop any poison relationship. Always look for the gentlemen and not just any man.

What is the most beautiful gift you ever received?

In relationship any gift is an expression of love.  It can be a white or yellow flowers, those colors I prefer the most, or palace or Bentley car, it doesn’t matter, but the real gift from your partner should be his support to you to success in life, encouraging, helping and doing his best for you. Second is common goals, it’s good to set common goals and work together to achieve them. Unfortunately this culture is not common in the most of relationships, but that is the best and the most beautiful gift I may receive not only from my partner, but from my family, my friends, from society. I think this should be a culture, a way of living our life.

What is your passion?

Travelling is my real passion and I am into a project to record my next trips as I am planning to go for long holiday to discover different cultures and ways of living. My trips will include records of local fashion, makeup, food , historical cities, music, nature and all aspects of life of those countries. Fashion and makeup is another passion. There are no such joy like shopping and wearing new fashion pieces, only women can understand that feeling.

What is the most beautiful country you ever seen?

It’s hard to answer this question because when you are a travel lover you will find beauty everywhere, each country is unique, has its own beauty. Each place tells you a story, whispers to you its secrets, tells you its sadness, or just makes you the happiest person in the world. Some places can take you away from this world and accompany you to moon or stars, even can make you fall in love with them.  Places are reflection of inside beauty of local humans, reflection of the conflicts, love, hate, sorrow; places are souls in my opinion, and each traveler will tell you the stories of those places through their own feelings and points of views.

But for sure there is one place that formed my sentimental and my personality, it is a haven and homeland for me. I didn’t find any country that could resembles it, so I come back here every time, as I never liked to travel or never been in other wonderful places, that is what I mean some places can make you fall in love with them, same as I am in love for many years. You are definitely curios to know what is that place, I will not let you wait a lot; it is the dream land of everyone – it is Dubai; Danat Al-Dunya as we say in Arabic.

Putin: yesterday, today, tomorrow. Russia's path to the top nations of the world. By Oleg Nikiforov

As an energy engineer by education, I have changed my scientific career to a journalistic one. I just started to write articles and I realized I liked it. Being able to write is a gift, you cannot learn it. At first I have been a sports journalist and specialized in fencing, since I achieved certain successes in this sports and even was a candidate for the USSR youth team. That was half a century ago.

And now I have written 4 books. The first one was published in 2012 by The Independent Newspaper publishing house and consisted of my articles on foreign policy topics. The second book was published five years later in English by Springer Natur, a German publisher. I wrote a chapter on shale gas. The next book was co-authored and published by the same publishing house in Germany and was devoted to gas supply to Europe.

My recent book about Russian foreign policy:  “Putin: yesterday, today, tomorrow. Russia’s path to the top nations of the world ”, currently being published in the German publishing house. You are welcome to read it. I promise this book is hot.